Volleyball rules can be very complex but once the basic terms are understood, all the rules become more understandable .
Here, we will discuss the important terms in volleyball  and explain the game in a simple matter to guide beginners. 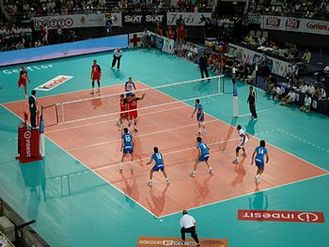 Number of Players
There are six people on the court for each team with three players in the front row and three in the back. Click here for details about positions and each player's role in the game.

Rotation
Rotation can be very confusing in volleyball but for beginners, the rotation is very simple. Players will rotate clockwise for every time you get the ball back in your team’s possession.

Game Play
Every game and play starts off with a serve. The ball is served from behind the back line of the court, the “end line”, and the ball can be served from anywhere as the server pleases. However, if they step on the line or cross it, it is considered a "foot fault" and will result in a “side-out” or a change in possession of the ball. Serves that hit the net but make it over are okay but if a serve lands outside of the opponent’s court, the opponent will gain a point and will result in a side-out. For each possession of the ball, the team can only have three contacts (touches) with the ball and no one person can contact the ball twice consecutively. The three contacts are usually the bump, set, and spike, but are not limited to this.
Scoring
A point is scored when:
A set (game) is won when a team scores 25 points with at least a 2 point lead.
A match is won when a team wins 2 out of 3 sets. Sometimes teams will play best 3 out of 5 and the 5th game will typically only go up to 15 points.
Powered by